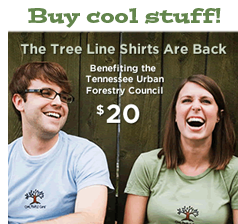 Great Holiday Gift!
Free shipping until
the end of the year

Thank you, new and
renewing members

End of the Year

In honor of Jennifer Smith, Nashville, by Cheryl and State Forester Steve Scott
In memory of Jennie Chappell, by Tennessee Department of Transportation, Environmental Division
In memory of Dorothy W. Wade, Harrison, by Sandy Gribble and Jackie Bowen

The Awards of Excellence are cosponsored by TUFC and the Tennessee Department of Agriculture, Division of Forestry. Eight individuals and organizations were recognized for their outstanding leadership, education efforts and activities that have made a significant contribution to establishing and maintaining viable community forests in Tennessee.

The 2010 award categories and winners are:

Second and third place went to Aquilino Amador of Davey Tree in Nashville and to Jeff Cochran, a Nashville independent arborist contractor. Also making it to the Master's Challenge was Chris Coates of Maryland. Participants came from several states.

Our appreciation go to event chair Scott Winningham of Arbor Medics in Cookeville, staging chair Wes Hopper of Urban Forestry in Memphis, and host of judges who come from across the state and country to provide the contest judging and oversee the safety measures. 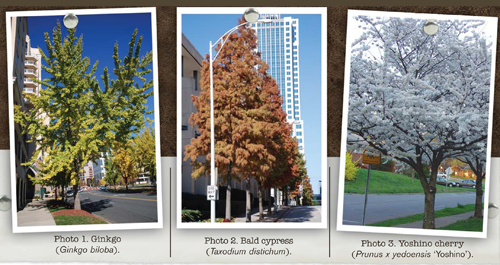 Read the article, courtesy of Tennessee Nursery and Landscape Association

UT Extension Area Specialist Hubert P. Conlon and Bill Klingeman of the UT Department of Plant Sciences surveyed 16 Tennessee foresters about urban tree species. The survey asked about preferred deciduous and evergreen trees for urban streets and large land areas as well as undesirable species. The study was published in the spring 2010 edition of Tennessee Greentimes, the quarterly magazine of the Tennessee Nursery and Landscape Association.

Tennessee leads the nation in Tree Line USA utilities after adding three in 2010.

New standards were introduced for 2010. Utilities must:

Johnson City Power Board was featured in the Arbor Day Foundation's Tree City USA 2010 Annual Report for helping support the local tree planting efforts of both Johnson City and Jonesborough and for developing a model demonstration area at the Appalachian Fairgrounds.

The Society of Municipal Arborists in conjunction with the USDA Forest Service Urban & Community Forestry Program and the Texas AgriLife Extension Service is launching a paid internship program for junior and senior college students interested in a career in Municipal Arboriculture. Application deadline is January 14. MORE INFO